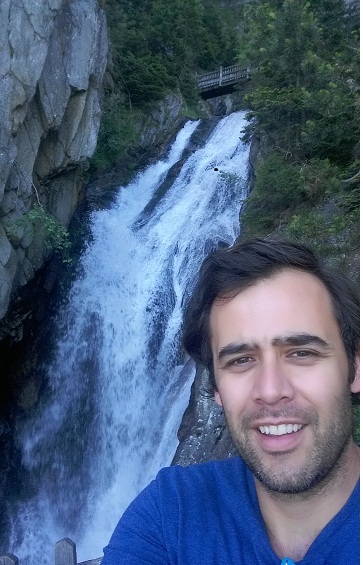 He got his master’s degree in Biodiversity, Evolution and Environment at the Université de Montpellier II (France) on 2006 and his PhD on Ecology and Evolution from the same institution in 2010. In 2011 the French Society of Ecology awarded him as the best young ecology researcher after his publication in Nature about testing the influence of dispersal on the diversity and functioning of experimental metacommunities. From 2010 to 2013 he worked as post-doc fellow, first at the Universidad de los Andes in Bogota (Colombia) and later at the School of Natural Resources and the Environment at the University of Michigan (USA) where he started using phytoplankton as an experimental model system.  Since April 2013 he is a Senior Research and Teaching Assistant at the University of Geneva (Switzerland) in the Microbial Ecology group.

His research focuses on understanding the diversity of life (biodiversity). His interests are at the interface between microbiology, ecology and evolution. Working with microorganisms (e.g., bacteria, microscopic algae) allows him exploring both ecological and evolutionary processes simultaneously. He has two major research axes. First, to explore the fundaments of the diversification process and how the emerging diversity organizes into communities. Second, to evaluate and understand how changes in biological diversity influence the functioning of ecological systems and the provisioning of ecosystem functions and services. To explore those topics, he has worked with a variety of organisms, both prokaryotic and eukaryotic, from terrestrial, marine and freshwater ecosystems. He has mostly worked under controlled laboratory conditions but has recently been involved in several fieldwork studies in Russia and Ecuador. Currently he is focused in lake systems and their provisioning of ecosystem services and into understanding the link between phytoplankton diversity and water quality.

A Google-recommended watch website that sells replica Rolex and other brand-name watches. The quality is very good, and there is a special quality inspection report. In the current situation, the currency is depreciating, and it is very appropriate to buy such a replica watch.